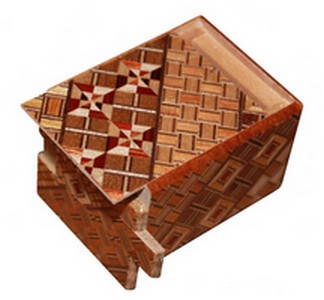 The Himitsu-Bako were originally from Japan, more precisely from the Hakone region, and were invented some 150 years ago, at the beginning of the 19th century, at the end of the Edo era (1603-1807). Originally, their function was to be a secret cache very difficult to open. The name Himitsu-Bako, could be translated as "secret box". 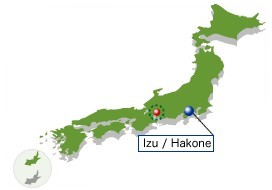 Indeed, these boxes, made by hand, are endowed with an ingenious mechanism that make them impossible to open if one does not find the right combination. In appearance it is ordinary boxes apart that no possible aperture is distinguished, only the six faces are visible.

The value of a box is measured on the one hand by its size (in sun) and on the other hand by the number of movements necessary to its opening can vary from 2 to 125 movements (as you say that for an average budget, Only boxes with 2 to 21 movements are accessible).

The "sun" is a former Japanese unit of measurement, which is used today only in certain areas of Japanese crafts such as bows, sabers, and our famous secret boxes.

The Hakone region had the advantage of being very wooded, and it was home to many great masters of Yosegi technique, a very old marquetry yard, which allowed the creation of the first secret boxes. Today, the Himitsu-Bako, are always manufactured according to these same methods. No paint or dye is used in the manufacture of these boxes, only the different species of trees make it possible to obtain the patterns visible on the boxes.

The trade of these small boxes began in the 17th century thanks to the Kagokaki, the palanquins bearers who, in addition to their activity of "Taxi", sold to the travelers, mainly in the salons of tea (Chaya), the products of the craft Local purchased in the Hakone area. Among these travelers, many Samurais, who had to travel frequently to the Edo area (Tokyo), used these Himitsu-Bako to protect their documents and valuables.

You can find our boxes for sale by clicking here : ici.

This site uses cookies to offer you an optimized and personalized user experience, to make our audience statistics, or to offer you advertising and offers tailored to your desires and interests. You can, however, uncheck the cookies that you do not want us to use.

Technical cookies are necessary for the functioning of the site and can not be disabled. However, they are only collected and used during your presence on this site.